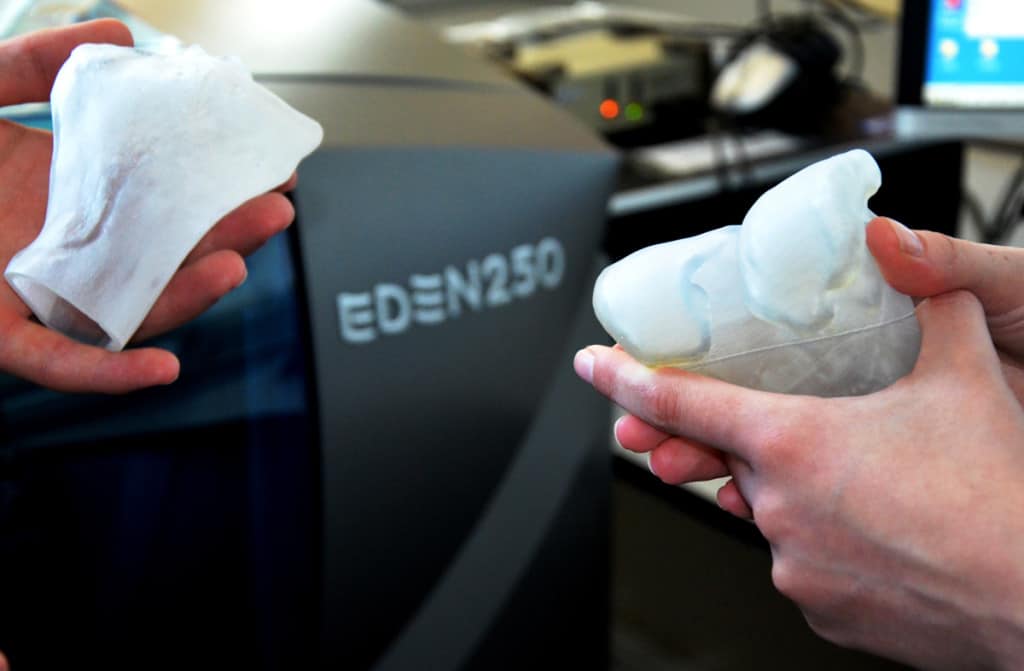 Reconstructive surgery normally involves total joint replacement which is normally coupled with full trauma and anxiety for the patient. For the surgical procedure high skill is required with visual interpretation, the use of hand tools, multiple X-rays and the process mostly restricted by the use of ‘off-the-shelf’ standard implants. 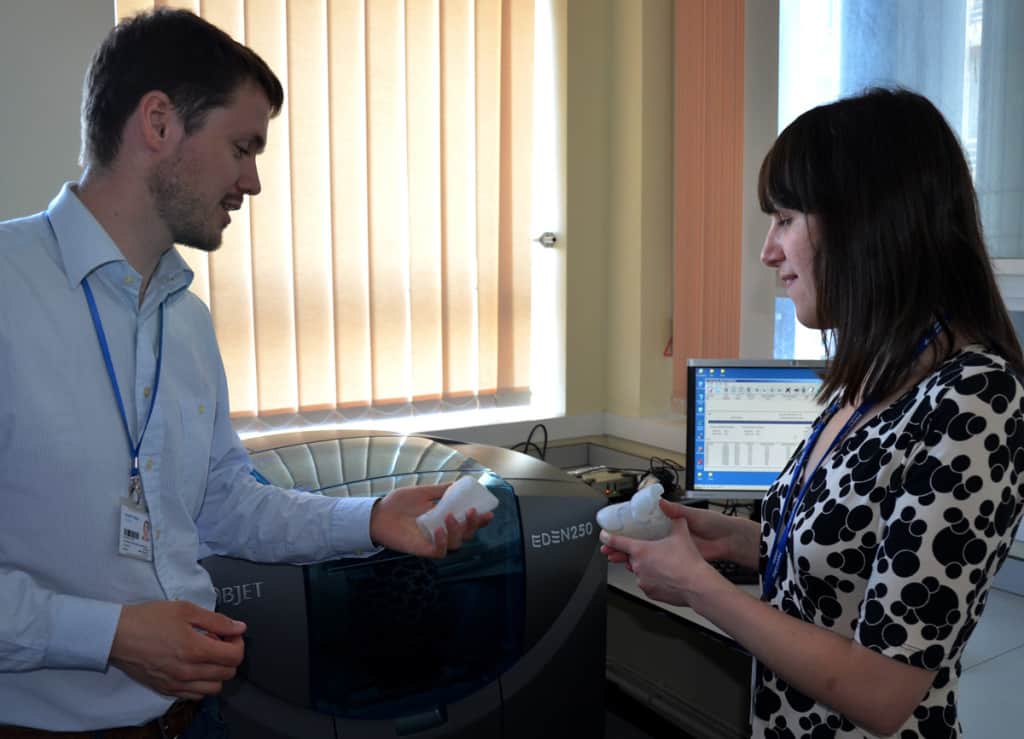 Pioneering surgery that could lead to a revolution in orthopaedic adult reconstructive knee operations is about to be performed by Professor Justin Cobb, who holds Chair in Orthopaedic surgery in the Dept of Surgery and Cancer at the world-renowned Imperial College Healthcare NHS Trust based in Charing Cross Hospital Campus in West London.

The process revolves around use of 3D printing technology for creating technically complex bespoke solutions for the patient through pre-operative modelling. It is also used to help in the planning of surgery and creation of osteotomy intraoperative cutting guides and patterns for titanium fixation plates that will in this case, rebuild a soldier’s knee ripped apart by gunshot wounds. Said Professor Cobb: “This operation using 3D printing technology is a ‘world first’ for reconstructive surgery providing total liberation to the surgeon and opening up a completely new approach to the operation.”

Professor Cobb, with research associate Dr Susannah Clarke who completed a PhD in computational analysis of total joint replacement, installed the Objet Eden 250 3D printer in January 2012 supplied by SYS Systems Ltd in Derby which has worked closely with the Lower Limb Arthroplasty Unit at Charing Cross Hospital. Their goal was to develop a ‘patient-matched’ process of conserving as much of the original functional and healthy joint tissue as possible while lowering the need for ligament reconstruction to help speed recovery.

As a result, the new surgical process helps to realign the leg by using pre-operative 3D modelling followed by modelling the fixation plate and a series of cutting guides to accurately and more quickly reconfigure damaged areas of bone. As a result this avoids the anxiety and the full trauma associated with cutting the limb and replacing the whole joint. The Objet 3D printer has also created models for the customisation of the fixation plates used across the periphery of the joint. The custom knee implants which are designed and then produced by specialist Stanmore Implants of Elstree are then robotically inserted into the patient.

Over the first six months following installation, the Objet 3D printer has been used on some 80 different trials plus three clinical trial experiments to research elements of the process on very difficult and complex cases. Any variation in the positioning of any replacement knee can ultimately hinder the durability of the implant and function of the joint which means that precision and skill have to be regarded as the most critical elements in the whole operation.

Not only should the new approach to the process speed recovery, especially in young otherwise healthy limbs, it should add value by reducing key operating theatre times from around 40 to 30 minutes and considerably reduce costs due to the number of different surgical instruments that need to sterilised from the normal four or five trays to just one.

Meanwhile, in the case of the Iraq war veteran who was shot above and through the knee joint in 2008, leading to a life where he has been according to Professor Cobb, still virtually lame despite previous operations. “This new approach to reconstructive surgery should be able to re-establish his quality of life,” he said.

Normally the standard operating procedure would make use of hand-held saws, cutters and metal jigs to guide bone preparation with the whole procedure being very reliant on multiple X-rays, the visual aspect and interpretation of action needed at the time taking in the very high skill of the surgeon. Surgery can also be restricted by the use of ‘off-the-shelf’ standard sizes of implant and due to variation in the limbs of different patients, the need to select from a wide variety of instruments can mean up to five tray settings have to be prepared and sterilised-all at added cost.

Still a practicing surgeon Professor Cobb is devoted to the development of future generation procedures and related products that can become standard tools for surgeons to improve their working environment, help the patient and to reduce costs. From his input, experience and expertise he helped to develop a method of using robotics to prepare the bone with the capability to be applied to specific patient applications for implant fixation. The process also helps the re-alignment of the joint to overcome any distortion in the limb. So, the move to integrate 3D printing into this process now provides greater opportunities to again improve the surgical procedure.

The pre-surgery procedure will now use the effectiveness of low radiation dose CT scanning of the anatomy of the patient’s limb to capture multiple slice images of the joint and ligaments to create a personalised knee scan. This is built up into a SolidWorks 3D imaging model to provide an accurate visual address to the extent of the damage to the limb which is then transported into the Objet 3D printer using MED 610 bio-compatible material allowing prolonged contact to be made with the skin. Not only does this solid model give pre-operative visual and tactile information but also the intra-operative guidance to assist the planning and undertaking of the surgery.

The surgical process involves the Objet printed cutter guide being located in position on the bone from which Professor Cobb will use the formed slots to guide a wedge shape cut into the bone. The wedge is removed and the bore realigned to straighten the limb. The robot is then used to cut a curved void to allow the new bone implant to be fitted.

According to Dr Clarke, who had previous experience of 3D printing in other areas of Imperial College, the selection of the Objet 3D printer through SYS was made on the back of its simple interface giving an excellent standard for ease-of-use and being very easy to clean for the medical environment. She maintains this decision was rewarded with a trouble-free installation, the direct linking of the software with SolidWorks and the integration into the surgical process being very straightforward. She said: “The machine fitted exactly into the concept that Professor Cobb envisaged for the work he was doing to improve lower limb surgery.”

However, Dr Clarke recounts that most important was the post-installation back up and support provided by SYS which she says has been very quick and efficient and any questions or uncertainties being just a solution providing phone call away.

Since the installation of the Objet machine it has almost been regarded as a solution looking for additional problems to solve. It has been drafted in to produce half sets of vice clamps to fixture for instance, 20 bones for stress testing. With the form moulded into the vice jaws each bone is set in the same presentation which ensures repeatability of the process without lost time spent on re-alignment.

The production of intraoperative cutting guides, now take about two hours to create for use in surgery by Professor Cobb. These guides help to optimise the process and thus minimise the time for cutting the limb from around 12 minutes to nearer 7.5 minutes.

At Imperial the Objet Eden 3D 250 printer uses only the MED 610 material but has the capability to work with up to 10 different materials including ABS, polypropylene and transparent with a variety of colours and physical characteristics. The process is based on using 16 micron print layers (30 micron can be used in high speed mode) to create models accurate to between 0.1 to 0.3 mm, while being realistic and useable for form, fit and function, prototyping and testing.

The Objet Eden 250 3D printer has a capacity for models 260 mm by 260 mm by 200 mm. Post curing of models is not required and as at Imperial, models are simply cleaned using a semi-high pressure jet ready for testing.