A team of professionals at the Institute of Cancer Research in London has created a first-of-its-kind 3D model of the protein being targeted by a novel drug in development designed to help kill cancer cells.

Since 2005, the Institute have discovered twenty drug candidates, eleven of which are in clinical trials today, and five of which are approved by the FDA for use against a range of cancers. As a result of these discoveries, more than half a million patients around the world have received life-saving treatment from the Institute’s research. 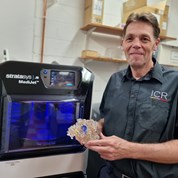 Craig Cummings is an Engineer, and research and design workshop manager at the 3D printing lab at the Institute of Cancer Research. Overseeing a team of four, Cummings uses Stratasys J5 3D printers to produce 3D models of proteins involved in different types of cancer as part of the institute’s work to develop new targeted treatments for the disease. Craig Cummings said:

“The newest 3D print technology allows us to bring to life how we traditionally visualise cellular proteins on a computer in computational chemistry and biology.”

“With advancements in scientific imaging technologies, it is now possible to create high-resolution molecular models of proteins involved in various types of cancer and develop personalised therapies.”

One of the major challenges when developing new drugs is determining which molecules are ‘on target’ within the cell and killing the cancer cells, and which are not. A primary goal of the Institute of Cancer Research ‘s work is to use the latest technologies to visualise the proteins that are targeted by these drugs and to determine whether they are the right fit. The J5 MediJet printer is specifically designed for this purpose, allowing the team to create highly detailed models of these molecules that mimic the way they would naturally occur in the body.

Together with a team of scientists and clinicians at the Institute, Cummings is using this new modelling technology to discover new treatments for a range of cancers including breast, lung, ovarian, prostate, bladder and blood cancers.

With the J5 MediJet 3D printer, The Institute of Cancer Research can produce incredibly detailed models that show the exact arrangement of all the atoms within the molecular structure. This allows more informed predictions about how the drug will work and the ability to identify any potential side effects before conducting clinical trials in humans. This technology has already helped physicians discover new ways of targeting proteins that are responsible for helping cancer cells spread within the body. 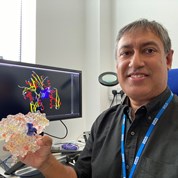 “Proteins within a cancerous cell are not rigid,” explains Amin. “They are complex in structure and flexible; designing a compound of compatible size, shape, and with suitable chemical properties to get into the protein is incredibly difficult. In drug discovery, we’re working to develop drugs that will fit into the relevant gap or pocket within the protein structure and stop it working.”

Prior to the development of the J5 MediJet 3D printer, modelling such complex proteins was an extremely laborious process requiring multiple two-dimensional analyses with legacy filament-based print technology taking two weeks to three months to produce a single model. The model, once produced was too small to provide much useful information and many had to be destroyed as they were not high resolution, sturdy enough to withstand repeated handling or required too many steps for analysis.

This all changed with idea to use the J5 MediJet 3D printer to create three-dimensional models of the complex proteins. This would allow them to make more accurate predictions of how the compounds would work and whether they would cause any unwanted side effects in patients.

Using the J5 MediJet, which the Institute first initiated in 2021, the models created using the Institute’s in-house machines took just hours to print. Not only that but because the models are 3D printed using Polyjet technology, the team’s research could be conducted in a single build while previously they would have had to break these down into several smaller models. Using this method, the group were able to create highly detailed models that captured the shape and movement of the molecules the team were interested in studying in greater detail than ever before. The technology allowed the team to replicate proteins in extraordinary detail creating accurate strands, ribbons and helices. Amin Mirza continued:

“It requires quite a huge leap in imagination to understand the dynamic nature of these proteins and the gaps within them.

“Visualisation is incredibly important so cancer researchers can design a chemical compound to target these pockets, disrupt the protein’s function, and stop the cancerous cell from replicating. 3D modelling allows us to see in and around cellular proteins at the biomolecular level.

“These models will help equip the next generation of cancer researchers.”