OPS is proud to be announced as Objet’s European Partner of the Year.

3D printing is a form of additive manufacturing where a three-dimensional object is created by laying down successive layers of material on a machine visually similar to a large desktop printer.

OPS views the award as recognition of the big strides it has taken since its foundation just under two years ago. Andrew Fulton, the company’s managing director, and his team started OPS UK with nothing more than a unique approach to distribution. He describes the company’s growth as a steep learning curve, only possible thanks to support from Objet’s territory management and training teams in the UK, Israel and Germany.

“There are three things to consider with regard to the award,” explained Chris Baker, Objet’s UK sales manager. “The first thing is that the UK did extremely well in 2011 as a whole, showing tremendous growth. The second thing is the increased interest in rapid prototyping and 3D prototyping overall, within which Objet is gaining market share.

“The final factor is that this was only OPS’ second year as a distributor. Bearing this in mind, it’s amazing that they showed the highest growth rate and most significant expansion. We were very impressed with the level of investment they made to get their infrastructure in place. This showed in everything from sales and administration to customer satisfaction and marketing,” concluded Baker.

“We are meeting all of Objet’s key criteria,” explained Andrew Fulton. “We’re growing quickly, communicating with them in the right way, training our people properly and to Objet’s high standards and feeding back UK market information. I think they described us as the model partner, which is a great tribute.” 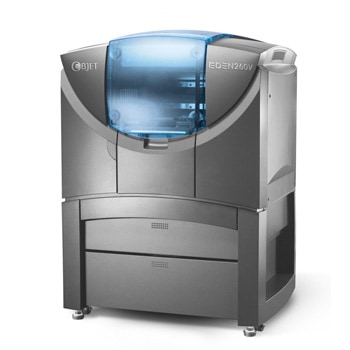