Sales Manager Rob Thompson and Sales Engineer Chris Andrews both received the award, making SYS Systems the only reseller in the entire EMEA region to gain the award for two members of its staff.

These latest sales awards for the pair come only a month after SYS received its Platinum Partner status for a ninth consecutive year.

This means that Chris’s and Rob’s efforts for SYS Systems stood out even across a huge geographical pool of resellers.

Rob, who also received the award in 2019, said: “It’s fantastic to be recognised for a great performance again. Coming off the back of earning Platinum Partner status for our ninth year, it’s clear we’re doing a lot of things right.

“It’s been a great year for SYS Systems so far and there’s plenty more time to push even further.”

Rob and Chris actually received their awards for their sales performances in 2020. Due to the challenges of the past year, this was the first chance for a face-to-face visit and to be presented with them.

Chris Fulton, Managing Director of SYS’s parent company Carfulan Group, said: “I’m really happy to see our staff be recognised for their work. Everything we do here at the Carfulan Group is a team effort, but for Stratasys to recognise Rob and Chris individually is really special.

Massive congratulations to both of them and a big thank you to the colleagues that support them from across the business.”

SYS Systems has been going from strength to strength through 2021. With attendance planned at events like the upcoming TCT 3Sixty industry show, the business is set to make itself known even more by the end of the year. 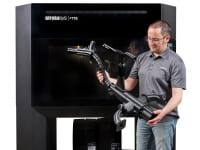