Get the Most Out of Your FDM 3D Printing Materials

Stratasys FDM-based 3D printers produce parts in production-grade thermoplastic materials, placing them as a number one choice for manufacturers in aerospace, automotive, medical, dentistry, and many other industries. Fused Deposition Modelling (FDM) printing produces the most durable 3D printed parts, enabling users not only to create testable prototypes but also to manufacture end-use products like the customisable headphones from New York based company Normal.

Directly from the Stratasys Materials Business Unit itself, SYS Systems brings you a closer look at FDM 3D printing materials and their capabilities. This video demonstrates a collection of useful tips on how these thermoplastics can be used to maximise the potential of your printer and produce the best results from some of Stratasys most versatile and durable printing materials. 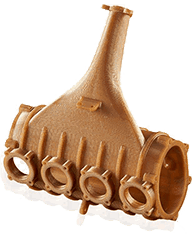 This video demonstrates the new Fortus 900mc Acceleration Kits capabilities, with the T40A tip, producing the largest available slice height. And, compared to the T20 tip, it can 3D print large tools and parts up to three times faster with its newly developed throughput enhancement, providing an undeniable advantage when in need of producing large parts to a tight deadline.

Another useful tip shared in the video, is the use of self-supporting angles, in particular when producing functional prototypes or production parts in the ULTEM thermoplastics. A functional hollow aircraft wing can be 3D printed in an upright position in order to purposefully align the internal struts at an angle of 45 degrees to the print tray to intentionally create channels that are self-supporting, thus they require no use of the support material which would have proven difficult to remove from the inner cavities of the wing.

Each FDM material is suited to a variety of uses, to discover which one is best for you and your business, watch Stratasys Materials Business Unit describe the material properties and uses in the video. Take a look below for our breakdown of the tips.

ABS-M30 is a high strength, standard, general purpose plastic, primarily used in general use in medicine, food packaging and pharmaceutics. This thermoplastic is used in a considerable amount of applications, including concept models, functional prototypes, jigs & fixtures, manufacturing tooling and occasionally in production parts. We recommend using ABS-M30 in lightweight end-of-arm tools and other functional parts.

ASA 3D printing material is a standard production-grade thermoplastic, like ABS, but ASA is available in 10 fade-resistant colours. This material is suited to fit-form and functional prototypes and parts, especially for outdoor use. It produces the best aesthetics of any of FDM thermoplastic and, used in conjunction with the tip 10, a surface-finish of extremely high quality.

In order to ensure large parts are light, such as is imperative in aerospace particularly when producing aircraft structures and hollow wings, an internal honeycomb structure can be implemented to lighten the part. With ULTEM thermoplastic we recommend using a triangle diamond shaped inner-channel structure to ensure a self-supporting, smooth and completely hollow interior.

The fastest FDM 3D Printer is the new Stratasys Fortus 900mc Acceleration Kit with the T40A tip. Its speed is attributed not only to its extrusion tip but also its enhanced throughput which makes it 2 to 3 times faster on average compared to the T20 tip. The kit also delivers the largest possible slice height of any FDM machine, thus allowing large part production within a short amount of time. You can use the T40A tip with the ULTEM 1010 material as well as in the ASA material.

Tip 5: Cool it before you ruin it

Nylon 12s properties include: superior elongation at break, isotropic mechanical performance, strong chemical resistance, and high fatigue resistance. These properties contribute towards its engineering-grade quality that is recognised for its toughness. However directly after printing it, removing the part before it has cooled down could cause deformation. We recommend letting the part cool down in the printer, while still attached to the build sheet, until it’s cool and then it can be gently removed without damage.

At the top end of the Stratasys FDM 3D printing material offering is the ULTEM high-performance family, including both ULTEM 9085 and ULTEM 1010, they each feature advanced mechanical and thermal properties, combined with a very high strength to weight ratio. Their strength and lightness allow them to be used in aerospace and automotive prototyping. ULTEM 1010 also features specific industry certifications that expand its range of applications to custom food productions tools and autoclave sterilisable medical devices. We recommend when using either of the ULTEM 3D printing materials try to use self-supporting angles of 43-45 degree in order to increase time efficiency and reduce the material cost of printing, this will also allow you to build complex geometries without the need to manually remove the breakaway support.