“Over the last 12 months, the Objet 3D printer has proven to be such a powerful tool that it has become a ‘game changer’ for us by bringing aspects of engineering design and manufacture to life.” 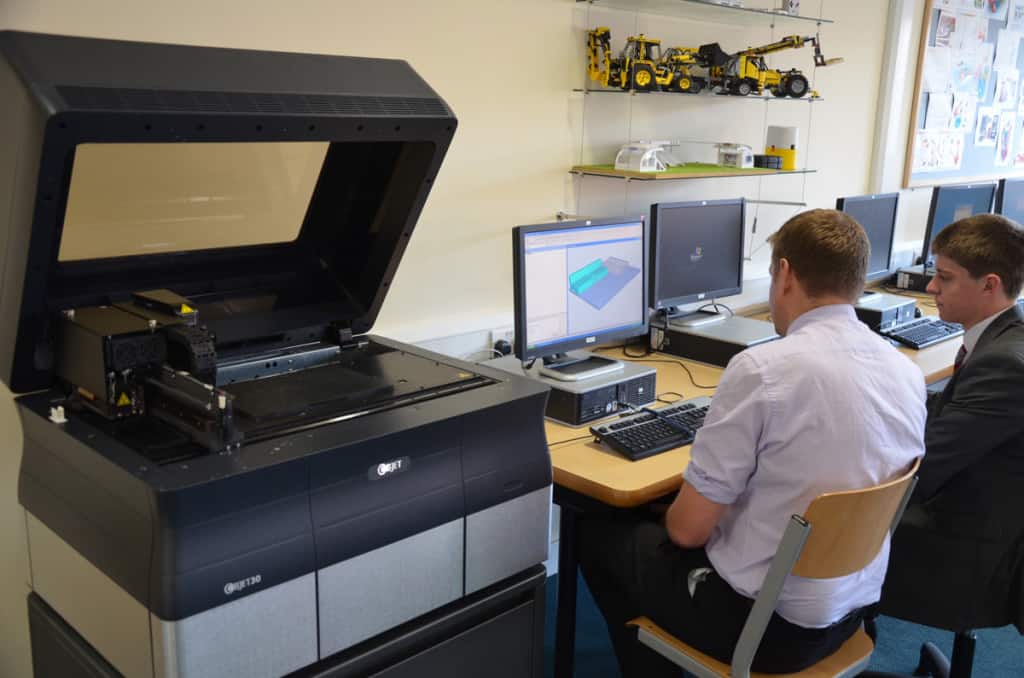 To promote additional student interest in design and engineering and encourage and help them understand the benefits of technology.

Warwick School’s Design and Technology department head Bryan Schalch justified the installation of an Objet30 desktop 3D printer from SYS Systems to provide pupils and students with the physical appreciation of turning an idea created on the computer screen into a realistic, multi-coloured model that could be held, passed around, discussed and presented as an important part of GCSE and A-Level examination course work.

Said Mr Schalch: “Over 12 months the Objet printer became a ‘game changer’ bringing aspects of engineering design and manufacture to life for our pupils using the system as an ‘ideas machine’.”

In the lower school years of 7 and 8 all 130 boys make use of DT workshops spending a term in each area. Year 9 pupils have the option to follow the subject and such is the level of interest this year helped by the Objet30 desktop printer that around 100 pupils are keen to maintain hands-on experience. For GCSE 80 students are taking DT and in the sixth form, 32 are taking the subject for A-Level. There are 16 seats of SolidWorks CAD in the DT lab with the Objet machine fully integrated into the technical appreciation of design and manufacture. 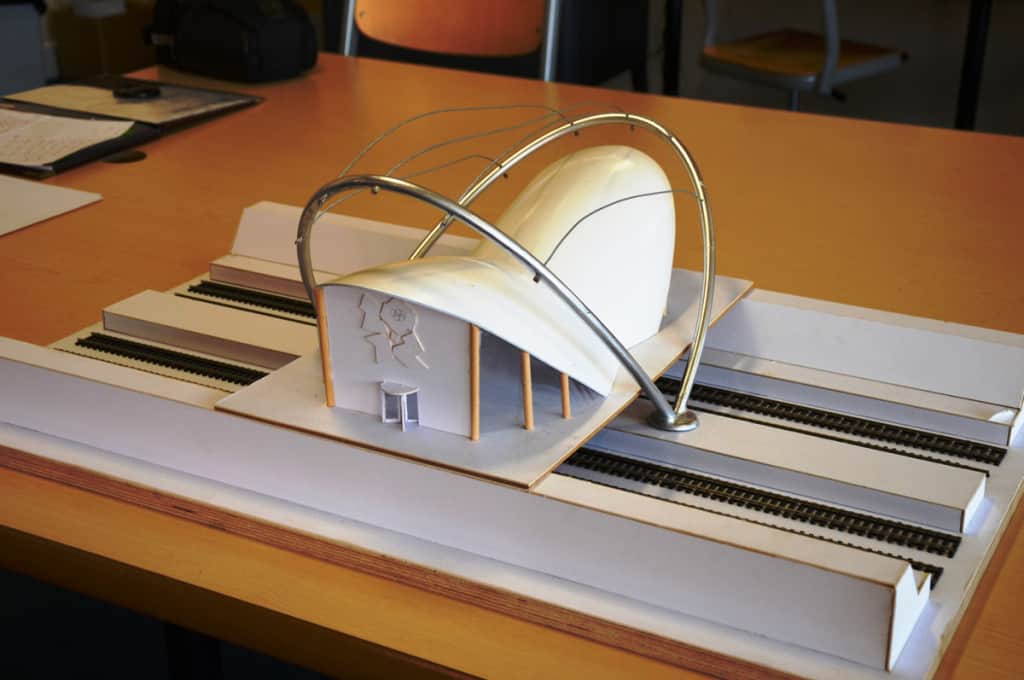 Having the foresight and dedication to improve pupil interest and the standing of Warwick School by installing the latest 3D printing technology at the Design and Technology laboratory, department head Bryan Schalch has brought alive the students’ interest in design and engineering.

The installation of an Objet30 desktop 3D printer has opened up new levels of awareness and interest among the pupils taking Design and Technology. The 3D printed models provide them with the physical appreciation of turning an idea created on the computer screen into a realistic, multi-coloured model that can be held, passed around, discussed and presented as an important part of GCSE and A-Level examination course work.

Said Mr Schalch: “Over the last 12 months, the Objet 3D printer has proven to be such a powerful tool that it has become a ‘game changer’ for us by bringing aspects of engineering design and manufacture to life. Also, we have had great feedback from universities such as Loughborough that have taken our students to study various aspects of engineering. They tell us that in terms of basic awareness of the subject, what our students have learned in DT, including the use of the 3D printer, has been a great help to enable them to ‘hit the ground running’ in their first year of studies.”

Indeed, taking on-board the reaction by its 15- and 16- year old students to 3D modelling, Warwick School is now planning, in the future, to offer other local schools access to this facility, including the Objet machine, in the hope of expanding interest in engineering (the only proviso is that the visiting schools help with meeting the running costs of the materials used).

Mr Schalch maintains: “More has to be done to increase the awareness of engineering and manufacturing, and we would like to see DT play a more significant role as a core part of the curriculum at Warwick. Engineering plays such an important part in the way we approach life, gain useful skills, help understand the benefits of technology and appreciate what is such a fascinating subject.”

He relays how word of the printer’s installation quickly spread and one ‘Old Boy’ of the school who recently set up a design consultancy after leaving Loughborough University offered to give master classes to the students in exchange for access to the Objet printer. Said Mr Schalch: “This has provided an even greater dimension to their appreciation of the technology and their overall awareness as they are also now benefitting from input from the ‘raw end’ of business experience.”

Warwick School is an independent day school for boys aged between 7 and 18. It has some 1,200 pupils, largely drawn from the Midlands, and some international pupils take up the boarding facilities. The understanding of the importance of practical subjects, has meant the headmaster Edward Halse continues to be very supportive of the subject and the continued development of the school’s high-tech facilities. The school also has excellent metalworking and woodworking workshops, where even the basics of oxy-acetaline welding and blacksmithing are taught as well as turning, milling, casting and moulding techniques through the guidance of their workshop technician who is a highly skilled and versatile ex-toolmaker.

In the lower school years of 7 and 8, all 130 boys make use of the DT workshops and laboratory facilities spending a term in each area. In Year 9, the pupils have the option to follow on with the subject and such is the level of interest this year that around 100 pupils have said how keen they are to maintain the hands-on experience. And the enthusiasm does not wane with time, at GCSE at least 80 students are still keen and in the sixth form 32 students are taking the subject for A-Level.

Said Mr Schalch: “With this level of interest it is important we invest in the type of equipment that is being used in professional and industrial circles, which is where the Objet 3D printer plays such an important role.”

Within the DT facility, the school has a site licence supporting 33 seats of SolidWorks CAD, of which 16 seats are in the DT lab which means the Objet desktop machine is fully integrated into the technical appreciation chain.

Justification for the investment fell on Mr Schalch who saw the potential for building pupil interest, opening up new avenues of creativity and extending the awareness of the importance of engineering. 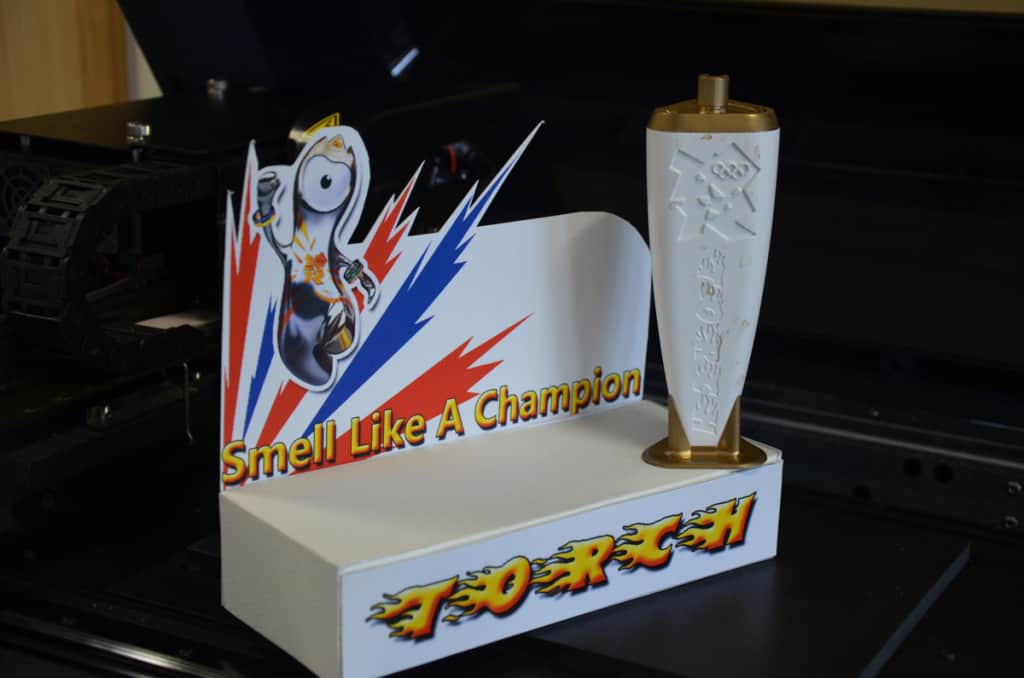 He describes how the process entailed much more than just placing an order and waiting for delivery. He was able to work very closely with SYS based in Foston, Derbyshire, which guided the DT department step-by-step through the most suitable machine specification from the wide range of machines available and helped to detail the proposal and presentation (to Mr Halse) in order to gain funding. Mr Schalch confirmed: “The presentation went so well with the headmaster quickly appreciating how the equipment would instil even greater collaboration and communication between the boys.”

The self-contained Objet30 desktop 3D printer has two jetting heads and a build tray size of 300 mm by 200 mm by 150 mm. With a build resolution of 600 dpi in X and Y and 900 dpi in Z, it is able to create a net accuracy within 0.1 mm using horizontal build layers as fine as 0.028 mm. The machine uses Objet’s FullCure materials that enable smooth, clean and highly detailed 3D parts to be produced using a wide range of materials. These include opaque white, blue, black and grey as well as a white polypropylene-like material, which are all supplied in sealed 4 x 1 kg cartridges. 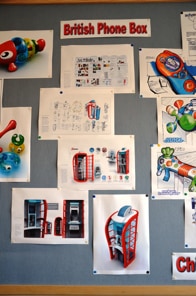 Once installed, the level of on-going support and training from SYS has enabled this ‘ideas machine’ to be fully used for conceptual work. This was considered to be a critical area in the purchase decision, because any issues involving model build that could be generated by the boys tending to want to ‘push-out the boundaries’. To which Mr Schalch responds: “We simply email any questions or model data to SYS and the support team will respond very quickly, which means there is no loss of motivation with the students.”

And the machine is not just a feature for the school’s Open Days. It is well used with pupils even coming into the DT lab during lunchtime and after school hours. Based on last year’s usage, between November and late June, the machine will be running day and night. So far the longest model build time has been 36 hours, but the boys are now into model concepts that could not realistically be created using other methods. Explained Mr Schalch: ” The machine gives the flexibility to easily modify a design, its detail, and the colour and finish from what has been created on-screen. When produced as a 3D model that you can handle, it comes to life and you will want to make changes as you chase perfection.”

Special projects completed include a 16-year-old’s GCSE undertaking that included a very topical fully sculptured 3D roof and associated parts for a scale model of an Olympic stadium. Following the same theme, an Olympic aftershave bottle with display and packaging was also created for GCSE work. For A-Level, one student calculated the aerodynamics for the ribs of a racing sailboat to give maximum performance and built the individual items on the Objet30 desktop machine, and another created a futuristic version of the BT red walk-in telephone box with clear windows and phone.